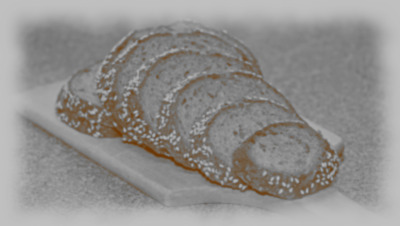 Bread that is sour can be made into good breakfast cakes. Cut it in small pieces, and, if not wanted for immediate use, it can be kept a number of weeks by drying the pieces in a moderately hot oven; care must be taken that it does not burn. When you wish to make cakes for breakfast, soak the bread over night in cold water; in the morning, drain off all the water, mash the bread fine, and to every three pints put one teaspoon of salt, three eggs, one teaspoon of soda dissolved in milk, one pint of wheat or rye flour; add sufficient milk to enable you to fry them as you would buckwheat cakes. If the flour which is used is mixed over night with a large spoon of yeast, the eggs may be omitted.

One cup of rice boiled tender in one quart of new milk, piece of butter size of a walnut, two eggs, a little salt. Make into a roll and, when perfectly cold, cut in slices, dip in egg^ then in crackers rolled fine, and fry brown in butter and lard, mixed.

One tea-cup of milk, one even cup of Graham flour, a little salt, one egg. Bake in gem pans.

Two cups of sour milk or buttermilk; stir in three cups of oat meal; then add one teaspoon of salt, and one teaspoon of soda dissolved in a little cold water. Bake in gem pans or in a sheet. The oven should be hot enough to bake in fifteen minutes.

One tea-cup of milk, one full cup of wheat flour, a little salt, one egg. Bake in gem pans.

Soak two cups of oat meal in two cups of cold water and a little salt, over night; in the morning add two cups of sour milk or one cup of milk and one of cream, one-half cup sugar, two teaspoons soda, flour enough to make a stiff batter. Have gem pans hot and bake in a quick oven.

Stir the grits into hot water, and boil half an hour. When cold, take three cups of grits, and the same of either white or Graham flour, one pint of milk or water, and a little salt. Put into hot gem pans, and bake half an ^our, or until brown. Baking powder can be used, though it is unnecessary.

Twelve tablespoons of corn meal, add a piece of butter the size of a Brazil nut, and one-half teaspoon of salt. Pour in a little hot water, then add cold water enough to prevent scalding the eggs, two in number; these must be well beaten before putting in. Beat the whole together five minutes. Bake in iron gem-pans in a moderately quick oven, thirty minutes.

One teacup of cold, boiled rice, one pint of corn meal, scalded, with sufficient water to make a thin batter, one tablespoon of butter, pinch of salt, three eggs well beaten, two teaspoons of baking powder. Put the rice into the scalded meal, add the butter, salt and the baking powder last. Have the gem-pans hot and bake quickly.

One half pint of corn meal, scalded, one cup of rice, three eggs, salt to taste; enough milk to make a batter the consistency of griddle cakes or gems.

Take gem batter and add chopped raisins, dates and figs, together or separate; roll the fruit in dry flour. Suit your taste as to proportions of fruit. If a little sweet cream is used in mixing dough, the cakes will be nice enough for dessert or a lunch for traveling.

Put to soak at night a cup of cold, boiled rice, in a pint and a half of milk or water. In the morning, add Graham flour until a moderately stiff batter is formed. Put into hot gem pans and bake quickly.

One pint of well boiled mush, one pint of new milk, one-half pint of yeast, two tablespoons of lard. Prepare flour with a little salt, put in the mush and milk while hot, then let it cool before adding the yeast. Knead in sufficient flour to prevent the dough adhering to the hands. It is improved by being frequently kneaded. Roll, and cut as biscuit, and let them rise one-half hour before baking.

One quart of flour, one tablespoon of lard; mix with water very stiff and beat well one hour.

Rub two ounces of butter with one-half pound of flour, add four ounces of sugar and a few drops of almond flavoring, the white of an egg and one tablespoon of milk, two ounces of sweet almonds well pounded; work well into paste. Take up pieces the size of half a dollar and bake a few minutes on buttered paper.

A novel way of baking them makes a very pleasing variety. (Use any baking-powder receipt.) Roll the dough thinner than ordinarily; spread it well with butter that has been softened;dust a good sprinkling of white sugar over and roll it up. Cut slices off from the end the usual thickness, allowing for considerable rising. They ought to be light and flaky.

Take four teaspoons of cream tartar, rub it well through two quarts of flour, one teaspoon of salt, butter the size of a goose egg also rubbed in the flour. Take three coffee-cups of sweet milk, dissolve two teaspoons of soda in the milk and mix all together soft. Bake in a quick oven.

Mix three heaping teaspoons of baking powder thoroughly, with one quart of sifted flour, add one large spoon of lard, one teaspoon of salt, and cold water or sweet milk enough to mix soft. Bake in a quick oven. Be careful not to work more than necessary in mixing the ingredients together.

Two quarts of flour, one even teaspoon of soda; pulverize it very fine with a knife, and mix thoroughly in the flour; two large spoons of lard rubbed in the flour, sour milk to mix soft, and salt. Roll thin, and bake quickly.

Five cups of Graham flour, one quart of water, a little warm, white of one egg, well beaten. Bake in a quick oven in small tins.