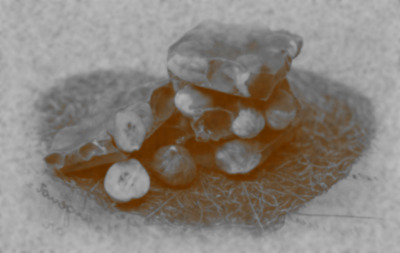 One cup of butter, one cup of sugar and one cup of molasses. Boil until it will harden in water, and spread it thinly in pans.

Three tablespoons of silver drip, one pound of sugar, butter the size of an egg and the juice of one lemon. Mix well before boiling; when done pour on buttered paper and cut into squares before it cools.

Beat the whites of five eggs with two pounds of sugar, and a little citric acid. Flavor with lemon and drop on buttered paper. Beat the whites of four eggs to a froth; add the juice of one lemon or a little rose-water; sift and roll a half pound of white sugar and beat with the eggs; spread white paper on buttered tins; drop the mixture on the paper, a tablespoon at a time, and put them into an oven only moderately hot. When the tops become hard take them from the oven, have a solution of gum arable, dip the lower sides of the cakes into it and join them together.

Take the same weight of sugar and of grated coconut, being careful before grating to remove the brown skin inside the shell; allow the whites of two eggs to one nut, beat them to a stiff froth, mix with the coconut, place on the fire and stir till it boils and looks clear; then remove it, wet your hands in cold water and make little pyramids. Put them on white paper greased with fresh lard, and bake in a moderate oven until the tops are a little brown. Take them from the paper while warm to prevent breaking.

Take equal parts of grated coconut and powdered white sugar; add whites of eggs beaten to a stiff froth, six to a pound, or enough to wet the whole; drop the mixture on buttered tins in cakes the size of a cent, and several inches apart. Bake immediately in a moderate oven.

Grate fine one coconut, and add two cups of sugar and the white of one egg beaten to a froth. Drop on flat buttered tins, and bake slowly.

One pound of sugar, one pound of grated coconut and whites of six eggs beaten to a stiff froth. Drop on buttered paper.