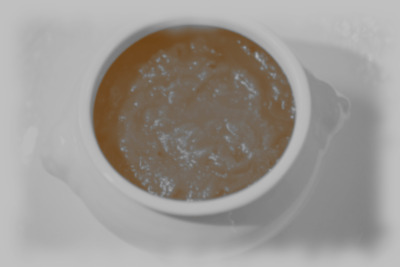 Put a piece of butter about the size of an egg into a sauce-pan, set over a good fire, have a wooden spoon ready and move the butter all over the bottom of the pan, so as to melt it as fast as possible, without allowing it to burn. Then take the sauce-pan from the fire, put in it about two tablespoonfuls of flour and stir the flour" well and fast, so as to mix it thoroughly with the butter; no lumps must be left. If the butter cools before the flour is mixed, set the pan back on the fire a moment. When well mixed, heat again, stirring fast, until the mixture turns of a yellowish color, when the flour is cooked. To finish, pour into the pan the liquor to be used, either water, milk or broth, stir and mix it with the butter and flour over the fire, then season and it is ready.

Mix smoothly several teaspoonfuls of flour with cold water, and pour into two-thirds of a pint of boiling water, stirring briskly until the whole boils up well; then remove it from the fire, but keep it warm. Have ready about a quarter of a pound of good butter, cut into small pieces, and stir them into the liquid. When the butter is melted, the sauce is ready for use. It should be free from lumps, but if not, it must be strained through a small sieve. If the butter is to be used for fish, put in slices of hard boiled eggs or capers. It may be converted into curry sauce by sprinkling in a little curry powder.

Put a couple of ounces of butter into a frying-pan. Heat over a moderate fire till of a dark brown color, add a half teaspoonful of vinegar and season to taste. This is nice for fish, or salad.

Chop fine one onion and a small quantity of mixed pickles. Put these in a stew-pan with a gill of vinegar, one teaspoonful of bread crumbs, pepper and salt. Boil all together five minutes, then add one gill of water and boil ten minutes longer.

Slice an onion and simmer in a pint of milk till tender. Have a cup of fine bread crumbs in a sauce-pan and strain the milk over it. Cover and soak half an hour, stir till smooth, season to taste and add three tablespoons of butter. Boil up once and serve. Boiling water may be added if too thick.

One tablespoonful of flour, a quarter of a pound of butter; mix together, and pour over it boiling water. Boil the parsley from three to five minutes, then squeeze and chop fine, and add to the butter.

Boil the eggs very hard; when taken up, put them into cold water; shell and chop the eggs rather fine, throw them into melted or drawn butter, beat it well and serve.

Stew your berries well, rub through a colander or sieve, sweeten to taste, blanch some almonds and, when partly cold, add them to the berries and put in a mold, turn out and serve.

Wash and pick over a quart of cranberries, put them in a saucepan with a teacup of water, stew gently, stirring now and then till cooked thick. Sweeten to taste on removing from the fire. Mold them, or put into the dish in which they are to be served. Some persons add a little cooking soda to save sugar, but it changes the color, an4 is apt to affect the taste, if a trifle too much is used.

Eighteen ripe tomatoes, one onion and three green peppers chopped very fine, one cup of sugar, two and a half cups of vinegar, two teaspoonfuls of salt, one teaspoonful each of cinnamon, cloves and allspice (ground). Cook till thick as catsup, but do not strain.

Separate the oysters from the juice; if there is not enough of the latter, add one-third water, season it and set where it will boil, thicken with a little flour, mixed smoothly with milk. When it has boiled several minutes, add half a pint of oysters to each pint of liquid; let them scald through, and remove from the fire. Cut a piece of butter the size of an egg in small pieces, and put in. Serve immediately with poultry. Another way is to put the oyster juice in the gravy of the fowl, and thicken with oysters and a little flour.

Take a few stalks of blanched celery, chop them rather fine and add them to a white sauce, giving just one boil after the celery is in.

Steep an ounce of celery seed in half a pint of vinegar. A few drops of this will give a fine flavor to soups, or sauces for poultry.

Put a great spoonful of butter into a gill of cream, keep it hot, stir it often, and when the fish is dished, turn the sauce over it.

Three ounces each of coriander seed and turmeric; black pepper, allspice, mustard and ginger each one ounce; cardamom seed and cumin each one-half ounce. Beat together, sift well, bottle and cork tight. To be used in seasoning meats and soups.

Six quarts of juice boiled away half, two pounds of sugar, two ounces of cinnamon, two spoonfuls pepper, one of mustard and cloves, one-half teacup salt, one pint of vinegar. Add the spices after the juice has boiled away, and ten minutes before taking off.

Mustard Sauce for Lettuce or Cabbage

Two tablespoonfuls of white sugar, two-thirds of a tablespoonful of made mustard, one teaspoonful of salt, one-third of a teaspoonful of pepper, butter the size of a black walnut, the yolk of one hard-boiled egg. Mix well together, using as much vinegar as is needed for the materials used. Put all together on the stove and let it come to a boil, then add one or two well-beaten eggs, stirring briskly till they are cooked. When ready, pour over the cabbage or lettuce, which must be chopped fine.

Five pounds of currant pulp, three pounds of sugar, one pint of vinegar, one tablespoon of black pepper, one-half tablespoon of cloves, two teaspoons of salt; spice it more if you like. Put the currants through a sieve; boil two hours.

One quart of grape juice, one pint of vinegar, one pound of sugar; spice with ground cloves; boil until quite thick.

Squeeze the grapes as for jelly, three-fourths pound of sugar to one pint of juice. Spice to taste with salt, black pepper, nutmeg, cloves and cinnamon. Boil until it is quite thick. To four quarts, just before it is done, put one cup of vinegar.

Nine pounds of gooseberries, six pounds of sugar, one ounce each of nutmeg, cloves, allspice and cinnamon in a bag together, one quart of vinegar; put all in a kettle and cook about three hours; then take off and strain through a sieve; put away in anything you choose.

Take twelve large cucumbers, grate them and salt well; then grate four onions, salt also. Let them stand five or six hours, then strain and add as much vinegar to the mixture as you obtain of liquid by straining. Season with cayenne pepper.

The walnuts should be young and tender enough to pierce with a pin. Prick them and lay in an unglazed jar, a layer of walnuts and a light sprinkling of salt, until all are used. Pound them lightly with a piece of wood, to break or bruise them. Let them stand ten days, stirring every day; then strain the juice into a saucepan. Cover the shells with boiling vinegar to extract the remainder of the juice, crush to a pulp and strain through a colander into the sauce-pan. For every quart allow one ounce each of black pepper and ginger, and one-half ounce each of cloves and nutmeg, a pinch of cayenne, a thimbleful of celery seed tied in a bag, and an onion minced fine for every two quarts. Boil all together, an hour for each gallon. Bottle when cold, dividing the spice equally in the bottles. Cork and seal.