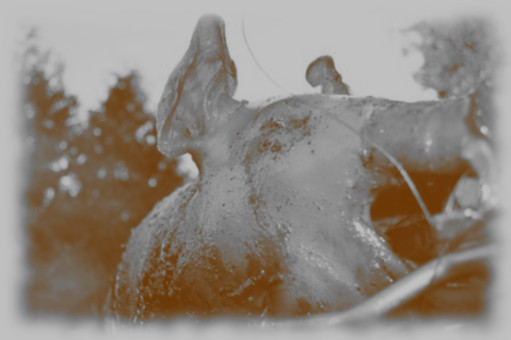 A pig, to be right for roasting, should be from a month to six weeks old. A very essential thing is to see that your butcher has done his part in cleansing it thoroughly. Examine every part—the ears, mouth and whole head, also the fat; if the hair should not all be removed, immerse it in hot water and scrape all out. Wash the whole, inside and out, wipe dry, and wrap immediately in a wet cloth to keep it from the air. For stuffing, take a cup of bread crumbs seasoned as you prefer, and moisten with three tablespoonfuls of melted butter; mix all together, with a half cup of warm water or milk and two eggs well beaten;, then stuff the pig into his natural size and shape, sew him up and bend his feet under, close up to his body, and skewer them there; dredge with flour, and put into a pan with a little hot water; baste with butter first, then with the drippings; when it begins to cook, rub it over every few minutes with a cloth dipped in melted butter—this makes the skin soft and tender. It will require as much as two hours to cook well, perhaps more. Send to the table whole, garnished with parsley and celery tops. Skim the gravy well and thicken with brown flour; add a little hot water if necessary, also some lemon juice.

This should be from a young pig. Score the skin in lines across the leg, as it is to be carved, and put it into a pan with a little water; heat slowly at first, or it will blister; baste with butter till there is enough of its own gravy for that purpose. Pork requires to be thoroughly cooked, and a leg weighing six pounds will require at least two hours, with a hot fire. When done, take it up, skim the fat from the gravy, add boiling water and thicken with flour; season to taste. Another way, is to remove the bone with a sharp knife, and fill the cavity with a dressing made of bread crumbs, seasoned to taste; lemon juice or vinegar improves it. The dressing can be put in where the skin is scored if the scores are cut deep. The leg must be tied with tapes to keep in shape and prevent the escape of the dressing; make the gravy as before. Apple sauce and pickles are always an acceptable accompaniment of roast pork.

Cover with a greased paper till it is half done; remove the paper and dredge with flour; baste at first with butter, then with its own gravy, quite often. Just before taking up, sprinkle bread crumbs seasoned with salt, pepper and sage, thickly over the surface; let it cook a few moments and baste with butter. Make a gravy and send to the table separately.

Fresh pork steaks should be in nice slices, with the skin taken off. Season them with alt, pepper, and sage if liked; broil or fry them quickly, using no butter. When fried, and gravy is desired, mix flour with the fat and pour in boiling water, or milk if preferred, and serve separately.

Dip first in beaten egg then in cracker or bread crumbs; season to taste and fry in hot lard, turning often till well done.

Clean pigs' feet and ears thoroughly, and soak them a number of days in salt and water; boil them very tender and split them. To souse them cold, pour boiling vinegar over them, spiced with pepper-corns and a little salt. They will keep good, pickled, for a month or two.

Clean and split the head of a half-grown pig, take out the brains and set in a cool place; par-boil the head in salted water, then take it out and wipe dry, cover with beaten eggs sprinkle thickly with bread crumbs seasoned to taste, and roast, basting with butter and the water in which the head was boiled, and in its drippings. Wash the brains until they are white, beat them up with one-fourth part bread crumbs, pepper and salt, together with a beaten egg, make into balls, and roll in flour and fry in hot fat to a light brown. Place on the dish around the head, and pour on the fat from the dripping-pan; thicken the remainder with brown flour and boil up once.

Pig's head is good baked with beans, or cured and smoked. It is also good prepared with spices. Boil the several parts of the entire head, and the feet, in the same way as for souse. All must be boiled so perfectly tender as to have the meat easily separated from the bones. After it is neatly separated, chop the meat while warm and season with salt, pepper, cloves, nutmeg and cinnamon. Put it in a strong bag, and, placing a weight on it, let it remain until cold; or put it in any convenient dish, placing a plate with a weight on it to press the meat. Cut in slices when used.

After boiling a pig's head and feet for head-cheese, take a cup of the meat and chop fine; put it in one gallon of hot water; when it boils hard, stir in meal to make the consistency of mush. Salt to taste, pour into a square bread-pan and, when cold, cut in slices and fry for breakfast.

Take a nice piece of pork with scarcely any lean, cut in thin slices; have the skillet half full of either warm or cold water,lay the pieces in and let them remain until the water boils, then take them out, turn out the water, roll the pieces in flour or Indian meal and fry till a delicate brown on both sides.

Take thirty pounds of pork, mostly lean; chop it very fine, season with eight ounces of salt, one -half ounce of salt-peter, two ounces of pepper, and such sweet herbs as suit the taste. They should be finely sifted; sage, summer savory, or sweet marjoram are all good. To keep for family use, the meat can be packed in stone jars and covered with a cloth, over which pour melted lard. When used, make into cakes. Bags for holding the meat, may be made of old white muslin, large enough to allow a slice to be from three to four inches in diameter. Keep in a cool place.

Put the roast in a pan and season well with salt and pepper. When about half done or more, pour off the fat, then surround your roast with apples prepared in the following way: pare the upper part of the apples about two inches wide, and put a band or cap of dough around the peeled part; place in the pan as described, and bake till done. This is very nice.

Obtain the "leaf" from a butcher, skin and scrape till it is clean, then cut it up in small pieces, and put over the fire in an iron kettle, which should be scrupulously clean, with a little water. When about half cooked, add a small teaspoonful of dry soda. As this makes the lard foam up, it is necessary to have room in the kettle, so it shall not boil over. When done, most of the scraps will be eaten up, and the lard will be very pure and white. Strain into a tin or stone vessel, and keep in a cool, dry place. It remains hard in warm weather.

For pork, make brine enough to cover the pork (let it be as strong as possible). For every layer of pork put a layer of ground black pepper, say 1 lb. to a barrel. Put in 3 or 4 oz. of salt-petre; this is not enough to make it taste, yet it is enough to keep the hams from getting hard. When used the second time do not scald the brine. For hams, to each 100 lbs. take 9 lbs. of salt, 5 oz. of salt-petre, 1 qt. of molasses, a large spoonful of soda and 4 Oz. of ground black pepper. Let the hams remain in brine from 4 to 6 days smoke and sack. Care should be taken to prevent the pork from freezing, or to be sure the frost is all out when put in the brine.