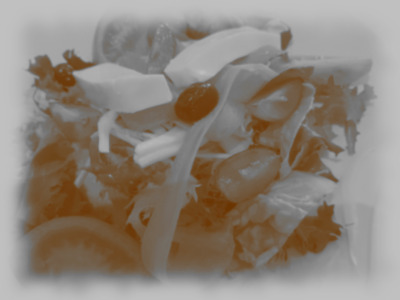 Two good sized fowls, one tea-cup of olive oil, one-half jar of French mustard, the yolks of ten hard boiled eggs, one-half pint of vinegar, one teaspoonful of cayenne pepper, eight heads of celery, one teaspoonful of salt, or more if required. Boil the fowls and put in salt enough to make palatable. When cold, cut the meat from the bones in pieces about a quarter of an inch in size. Cut the white part of the celery in the same way. Mix the chicken and celery and set them away. Beat the eggs to a paste with oil, then add vinegar, mustard, pepper and salt, and mix thoroughly. Do not pour the dressing over the salad till half an hour before it is served, or it will wilt.

Boil three chickens till tender. Pick the meat from the bones, and chop fine. Use celery in the proportion of one-third celery to two-thirds chicken. Chop it separately, and not quite as fine as the chicken. For a dressing, take one tumbler and a half of vinegar, three teaspoonfuls of mustard, half a cup of melted butter or oil, the yolks of five eggs, salt and pepper to taste. After beating, heat this dressing over a slow fire; then stir till nearly cold; then mix together, adding three hard boiled eggs, chopped. This dressing is also very nice for chopped cabbage.

For one chicken, take one tablespoonful of mustard, pepper and salt, one tea-cup of rich sour cream, one tea-cup of vinegar, one-half teaspoonful of celery seed. Mix well together, place on the stove, stirring all the time; when as thick as custard, take off and set away till just before using; then mix with chicken and cabbage.

Take one can lobster; pick out the soft parts and mash them; chop the rest of the lobster and the cabbage fine, having a little more than one-third cabbage; four hard boiled eggs; mash yolks and chop whites. Add mustard and vinegar to taste.

After having scraped and washed (not cut) the asparagus, boil it soft in salt and water, taking care that the heads are not injured; drain off the water, add some pepper, salt and strong vinegar and let it cool. Before serving, arrange the asparagus so that the heads will all lie in the center of the dish; mix the vinegar in which it was put with good olive oil, and pour on the asparagus.

Take cold boiled potatoes, and enough raw onion to season nicely, mince fine, make a dressing as for lettuce salad, and pour over it. If preferred, melted butter may be used in place of the oil.

Mix the yolk of one fresh q^v with 2 tablespoonfuls of olive oil very slowly, add 1 1/2 spoonfuls of mustard, 3 of salt, a little pepper, and last of all, 2 spoonfuls of vinegar. Beat the white of the egg to a stiff froth and lightly stir in. This is also excellent over sliced tomatoes.

One tumbler and a half of vinegar, yolks of five or six eggs, two-thirds of a cup of butter, three hard-boiled eggs, three teaspoonfuls of mustard; mix all thoroughly through the cabbage.