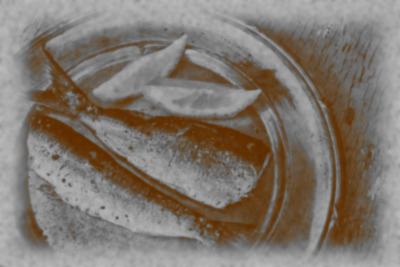 Open the fish so that it will lie perfectly flat. Rub salt over it and lay it in a dripping pan, with a very little butter and water. Put it in a very hot oven and bake twenty minutes or a half hour, according to thickness of the fish. When done it will be a delicate brown and will be cooked through without the trouble of turning. Of course the skin side is laid next the dripping pan. White fish cooked in this way are especially nice.

Take three or four pounds of fish for six or eight persons; cut in sections, crosswise. Take five or six slices of salt pork, lay them in the bottom of the kettle and let them fry slowly until all the fat is fried out; then remove the scraps of pork and lay in about one-third of the fish, then a layer of potatoes, then a sprinkling of chopped onions (chop two onions for the whole) then pepper and salt and some flour dredged in so as not to lump. Place in layers until the whole is used. Cover with cold water and boil fifteen minutes, then add a half dozen Boston crackers, split and wet in cold water; add one pint of sweet milk. Boil five minutes more and serve.

Let the fish lie in salt and water several hours. For five pounds of fish take three ounces of salt, two ounces of pepper, two of cinnamon, one of allspice, and half an ounce of cloves. Cut the fish in slices and lay in the jar in which it is to be cooked a layer of fish, then sprinkle spices, with flour and bits of butter on top; another layer of fish and seasoning, till all is packed. Fill the jar with equal proportions of vinegar and water; lay on a cloth pressed down close to the sides of the jar, and put flour on top, so no steam may escape. Bake moderately six hours; let it remain in the jar till cold, when it can be sliced for tea.

Fresh shad are good baked or broiled, but much the best broiled. For broiling, sprinkle salt and pepper on the inside when cleaned, and let it remain some hours. Salt shad for broiling should be soaked ten or twelve hours, in cold water. For boiling, they need be soaked only long enough to enable the scales to be easily removed. The roe is good either broiled or fried.

Lay five or six pounds of fresh halibut in salt and water for two hours, then wipe dry, score the skin in squares, and set in a tolerably hot oven; baste quite often with butter melted in hot water. When done, a fork will easily penetrate it. Serve with drawn butter, flavored with walnut catsup, or such sauce as may be preferred.

Enough may be soaked for several days at one time, hang it up to dry, and broil what is needed on a gridiron; when done, butter well, and serve while hot.

When thoroughly cleaned and washed, should be wiped carefully and laid into a dripping pan, with water enough to prevent scorching. Bake slowly, basting often with butter and water. When done, have ready a cup of sweet cream, diluted with a few spoonfuls of hot water, stir in carefully two tablespoonfuls of melted butter, and a little chopped parsley. Heat this by placing the vessel in boiling water; add the gravy from the fish and boil up once. Place the fish in a hot dish and pour over the sauce. Pickerel are good baked in the same way.

How to Choose a Salt Mackerel

A poor mackerel when salted has a heavy dead appearing eye, but a fat one will have a substance which resembles white jelly, sometimes covering the eye and extending back from it on the head. All salt mackerel have it to some extent, and the larger the accumulation of this substance, the fatter and better the fisn. In soaking fish, use plenty of water, and put the skin side uppermost, as the salt will then fall to the bottom and leave the fish freshened. If it is very salt, the water may need to be changed. The fish will broil nicer to be hung up an hour or two to dry, before cooking, though wiping with a soft dry cloth will answer very well.

If fresh, simmer them fifteen minutes in a little water with salt. Do not let them boil hard. If salted, let them lie in hot water half an hour before boiling, then change the water.

If fresh, when cleaned, boil them in salt and water. If salt, freshen them a little first. When boiled, take them out of the water, and save about half enough to cover them; mix it with an equal quantity of vinegar. Heat it scalding hot, wit,h a few peppercorns and cloves, and pour it over the fish. They will be sufficiently pickled in the course of three days.

Set the can of salmon in a kettle of boiling water, let it stand half an hour, take it out, pour off the juice or oil from the salmon and pour over it a dressing made of equal quantities of butter and vinegar, boiled together.

Wash well in cold water and wipe dry; cut in pieces to serve and broil on a hot gridiron, turning several times. When well heated through, take up, and put on melted butter.

Soak the thickest part for two days in sweet skimmed-milk, changing the milk twice. Roll in flour, and fry quite brown. Scald, but do not boil, a teacup of thick sweet cream, and pour over the fish.

Prepare Codfish for the Table

Remove the skin and bones. Make the fish fine by cutting it first in short pieces, then pick very fine. Throw into cold water for ten or fifteen minutes, letting it stand in a warm place. Prepare cream as for dried-beef. When it boils, add the fish skimmed from the water, and serve.

Soak over night; put in a pan filled with water, and simmer two or three hours. Serve with drawn butter, with hard-boiled eggs sliced in it.

Half a cup of butter, large tablespoon of flour rubbed with the butter. Pour on one pint of boiling water. Salt to taste.

Take mashed potatoes, and half as much cod-fish as potatoes; add apiece of butter and one hard-boiled egg. Mash well together, and make in balls. Fry brown in equal parts of butter and lard.

Pull the fish into small strips, and soak about half an hour in lukewarm water, drain off the water, and pour on milk, add butter. Three or four beaten eggs improve it. Let it heat, but do not let it boil or it will harden. Turn it on buttered toast.

Cut the fish into slices about two inches thick, dip in egg, then in bread crumbs, and fry to a rich brown in plenty of fat. Cod-fish is good baked after being boiled, and dressed with a rich sauce of cream, butter and hard-boiled eggs, rub a little flour into the butter. Garnish with parsley.