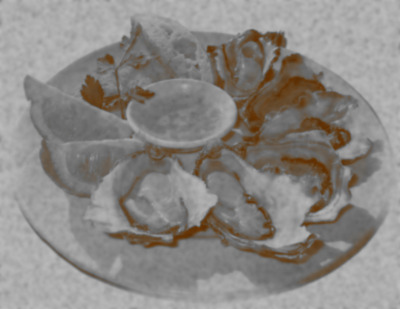 Take a nice paste, and line a deep dish, turn a teacup down in the center; this will draw the liquor under it and prevent it from boiling over; it also keeps the upper crust from falling in and becoming clammy. Lay in the oysters, with a little salt, pepper, butter and flour. Use but little of the liquor. Make a wide incision in the upper crust, so that when the pie is nearly done you can pour in half a tea-cup of sweet cream or milk. Secure the edges by moistening the under crust, and sprinkling flour on it before pinching down the top; place in the oven immediately and bake an hour. If allowed to stand, the under crust will be clammy.

Line a deep baking dish with rich puff paste, as for any other pie; fill with crackers or crusts of light bread. Have the top crust much thicker than the under one, and butter the edges so the crust will part easily when done. Put a roll of paste around the edge of the top crust, and bake. Drain the liquor from the oysters, put in a little hot water, salt and pepper, and set over the fire; when it comes to a boil, add a cupful of rich milk or cream; when it boils up once, put in the oysters, and stew five minutes; add a piece of butter, stir, and remove from the fire as soon as it melts. Time your work so that the crust shall be ready just as soon as the oysters are. Lift the top crust, pour in the hot oysters, and serve immediately.

Take a pint of oysters, season with salt and pepper to taste, put into a stew pan, with a large tablespoonful of fresh butter; set this on the stove, and, as the butter melts, stir carefully; scald the liquor by itself, and when the butter is hot, but not boiling, pour the oyster liquor in, stir all together, and let it stew fifteen minutes; set this aside in an earthen vessel. Have patty pans lined with puff paste; bake them a light brown color; just before serving, fill these with oysters. They should be eaten immediately, as the gravy, by soaking in, will render the pastry heavy.

Butter your pan or dish; cover the bottom with crackers, rolled fine. Add a layer of oysters. Alternate the crackers and oysters until you have three or four layers, the crackers being the top layer. Sprinkle each layer with salt and pepper and bits of butter. Moisten with a mixture of the oyster liquor and milk—butter on the top. Bake about three-quarters of an hour. Pickled Oysters Drain the liquor from the oysters, scald and skim it till clear. Then scald the oysters in the liquor till they begin to shrivel. Skim them out; add vinegar and whole allspice to taste; let scald and pour over the oysters.

Take the largest oysters and spread them upon a napkin; put another over to dry them; then season with salt and pepper; have ready some beaten eggs and crackers rolled fine; prepare in your pan some sweet lard and butter. Dip each oyster into the egg, then roll in the cracker and drop into the boiling fat; there must be enough to allow the oysters to float. Serve with hot cakes.

To fry, take fresh and good sized oysters, open and turn them into a colander for half an hour, to drain them. Beat two or three eggs in a bowl. Turn the oysters into fine cracker crumbs, and then shake them so that little of the crumbs shall adhere. Put the oysters into the beaten eggs, and stir them, after which, take them out one by one; see that they have been well dipped in the egg and roll them in bread or cracker crumbs. As soon as an oyster is well rolled in crumbs, put it into the palm of your hand, on its flat side, and press gently on it with the other hand. When thus prepared put them away in a cold place until they are put in the pan. They may be dipped in egg and rolled a second time, half an hour after the first time. After being rolled in crumbs, they may be kept in a cold place for hours before being fried, but the quicker they are eaten after they are fried the better. When fried, turn them into a colander, dust fine salt over them and serve hot.

Wash the oysters, put them in a deep dish in the steamer, and let them cook till they shrivel. In the meantime have the liquor on the stove in a half pint of water; scald and skim, add one quart of milk' and butter; pepper and salt to taste; roll one cracker fine and sprinkle in and let all scald together; pour over the oysters, and serve immediately.

Put the oysters on the fire in a pan, with a little salt and butter; remove them at the first boil, add pepper and a little milk and cream, and serve.

Put oysters, in the shell, on the gridiron or hot coals; when cooked, the shell usually opens a little; remove from the fire take off half the shell, put on butter, salt and pepper, and eat while hot.

Scald them in their own liquor, and wipe dry. Add one pint of milk to the liquor, a teaspoonful of salt, and five well-beaten eggs, with flour enough to make a thin batter, and drop the oysters into it. Take up each oyster in a spoonful of batter, and fry in boiling lard, till a light brown. Lay a soft napkin on a flat dish, and serve the fritters on this, that the grease may be absorbed by it, and not soak into them.

Chop a dozen clams fine; take the liquor from the clams, and add one pint of milk; to this add four beaten eggs, and flour enough to make a thin batter. Season to taste. Fry in hot lard. Lobster Croquettes Take boiled lobster and chop fine, season to taste, and have fine bread crumbs about one-third of the quantity of meat, and mix with two tablespoonfuls of melted butter. Make this into balls, roll in beaten egg then in fine bread crumbs, and fry in hot lard. Serve immediately.